1990’s. Bao. I hated these things. To me, they were water-logged, soggy dumplings. They were all the rage. People ate them at least once a week. New Bao restaurants popped up everywhere. Of course, there was even a restaurant called Bao Wow (play on words). Who needs Bao when there is ravioli? These baseball-shaped, culinary mishaps were a big ‘no’ for me.

2000’s. The return of the Cupcakes. They were bigger and more calorie-laden than ever. It used to be just a smear of icing. In the last decade, it was a misnomer to even call these monsters a ‘cupcake’ as it was just a See’s candy topping that just happened to have some cake underneath it. When Oprah started flying out her favorite cupcake, Sprinkles, from Beverly Hills to Chicago, this craze took hold.

Sprinkles
The icing is sky-high, at about an inch.

An ancillary mention to cupcakes were the CroNuts, a cross between a Doughnut and a Croissant. The delectable, high-butter content dough is first fried, then stuffed with cream or (fruit) filling.  Some ‘nut’ jobs lined up at 3 in the morning to get one before they ran out for the day. 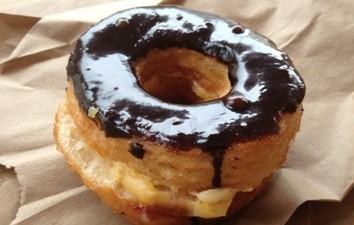 2010’s. Hmmm. A tough one. I am going to say hamburgers. There are so many good quality meats out now that chefs just took hamburgers to the next level. My favorite is Umami Burger, made with 3 different types of meat grinded up: beef brisket, skirt steak, and sirloin steak. Delish.

Stout Burger is a good entry. For Kobe Beef burgers, the Japanese interbred their cows with European cattle to produce meat with a high percentage of marbling, which yields a high-flavor profile. Also, this cattle is aged almost a full year longer than American cattle. A slower approach yields better meat, some would say.

Waygu made on a salt plate.

Waygu burgers, made from Japanese cows that are genetically predisposed to have excess marbling to yield the precise amount of fat (flavor). The burgers from New York City’s Bistro Moderne made news because they cost $50. They are made from ground sirloin and braised short ribs. The hefty price tag is because it is stuffed with black truffles. To me? Who cares? Although I love truffles, I find it cheating to raise the price on account of the truffles instead of competing just at the burger level. Fail. What are they going to do next? Add diamond dust to the burger and call it ‘The $500 Burger’? Let’s not leave the BBQ Boys out of the picture. Their beer can burgers make you bless the day that beer was invented just to have beer can burgers in our decade. Well done, cowboys.

1960’s. Jello Mold. I am convinced that most moms from the 60’s could not cook a lick. It was just before the invention of The Pill and they had to keep popping out babies. Who had time to cook with all those mouths to feed? You heard of “my husband only eats steak and potatoes” insinuating that steak was somehow a manly meal? I recently realized that I had this expression all wrong. It had nothing to do with men. It spoke to just how little the moms of the day could cook…none. First off, putting on a steak, hamburgers, or hot dogs on the grill was the dad’s duty. All she had to do was poke a few holes in a potatoes, wrap them in tin foil, and put them in the oven for an hour. You can’t make potatoes wrong (unless you undercook them = no skill required.) To round out her culinary skills, she made peas or corn. To really get fancy…she made ‘baby’ peas, not that she knew how to cook those, either. And if she wanted less trips to the market, so she would have more time for her soap operas before the kiddies got out of school, she would stock up on frozen peas and corn. She made sure to cook the life out of these, and other vegetables, usually, at least a half-hour or more, because that’s how long it took her to down her martini. Let’s face it, after dad got home, after a couple of martinis, no one cared whether you could cook or not. Little did she know that most vegetables only take 4 minutes to cook. We didn’t learn that technique for decades. When dad didn’t want to fire up the barbie, thank goodness along with the Space Age came those TV dinners. Pop that Salisbury Steak in the oven for 26 minutes and you’re good to go. It even gave you an apple fritter for your enjoyment. Done.

So what did these moms spend time with? Yup. Those dreadful jello molds. They kept finding more and more ways to add horrible ingredients to their jello molds. It took decades for these moms to finally stop making these things. Some foods, like fruit cakes during the holidays, just need to be retired. Gelatin should only be used as a supplement to strengthen hair and nails. I’d be happy to never see one of these molds ever again.

1970’s. On the heels of 60’s moms not learning a thing in the kitchen, in the 70’s, mom had to at least pretend they were cooking. Since many things in the 70’s were fake: vinyl, linoleum floors, plastic seat covers, microwaves, along came the invention of processed foods. These foods were already prepared in test kitchens to taste good. All you had to do is add the meat/chicken. Yes, it was the era of the ‘easy’: sloppy joes, shake ‘n bakes, and hamburger helper.

1980’s. Blackened Cajun food. With the surge of Louisiana cooking, came Chef Prudhomme’s Cajon Blackfish. Yummy yum yum. I love seasoning. I love spicy foods. Two of the best cooks I have ever met in my life are both from Louisiana. Both of them can go in YOUR kitchen and make something out of absolutely nothing. Both came from poor beginnings and are only resourced with imagination and creativity. Anyone can follow a recipe. To me, what makes a chef/cook great is someone who knows their seasonings: how to blend them, how to use them, whether to use them dry or make a sauce with them. That is the magic of the art. In New Orleans, you are taking their fine cuisine background, French, and marrying that talent with American Jazz. All good. No blue notes here!