I have been doing radio interviews, both terrestrial and internet, for about two years to promote each of my dating books. I have been a guest or a guest host dozens and dozens of times. Six times, I have been offered to host my own show…and I have said ‘no’, mainly because the offers were for internet radio, and that just didn’t float my boat.

I like to follow other radio people because it gives me inspiration and I learn what they are doing to stay relevant. One such personality is Poorman, Jim Trenton, of KROQ fame from the 80’s. I loved that show and I listened every day. He created a segment called Loveline. His co-host on the segment claimed the show to be his and a fallout ensued. That was about 30 years ago. Over the last year, Poorman was trying to make his comeback to radio and I was following his story to watch his journey unfold. He finally landed a gig with KCAA in the Inland Empire, weekdays at 2pm, PST,  so I wrote him and asked if I could be on his show. I told him we knew some of the same people if he needed to get a reference on me. He agreed to have me on the show that week. The show went so well that there was talk of having me on as a regular guest. I went on his show 3 times, then I asked for my own show.

I am in sales and a marketer. I have tried 1,001 things to help promote my books. Most of what I tried offered lackluster results. On the third episode with Poorman, my sales exploded. At first they were 5x more than regular sales, then the numbers just kept growing and growing. My Amazon sales graph cracked the top 100,000 books. Usually, my numbers hover around 200,000-300,000. Anything under 100,000 and you are on the map and sales are steady (on a scale of best seller, number 1, to being in the top 1,000,000). After that third day, my sales ranking had climbed to 26,000 which is very impressive. That’s when I made the call to get my own show.

I paid my dues. I already did my ‘apprenticeship’ by having my own cable TV show for 18 months while I was researching my men’s book. I was the host and the producer. It was a mountain of work. TV is much harder than radio. I had the director, the cameraman, and the engineer barking orders in my ear piece and I had to act like nothing was happening to keep the show moving. It was stupendously hard. I only quit because I needed to focus to finish my book. I felt I didn’t need more ‘time’ by taking on an internet radio show to gain experience. I was ready.

Since I’m a newbie (and not being paid a fat paycheck), to make my upcoming show viable, I have to gain sponsors, and in rather short order (as my paycheck will come from the sponsors). Ok, I’m up for the challenge, mainly because I want the show so darn badly. I will do whatever it takes!

After I get the job, I’m stressing out about how I am going to get all these sponsors. Shortly thereafter, the phone rings. It’s the reporter from the New York Post whom I met at the Los Angeles Times Festival of Books. He says he is covering a media event and thinks I would do well by attending. “Oh”, he adds, “Larry King is the guest of honor.” As I hang up the phone, I think “Boy, do I have lucky stars?” as to whom better to ask than the ‘King of Radio’ about sponsors?

The reporter and I get to the event quite early. Finally, at the appointed time, Mr. King walks in. He is larger than life on TV. In person, although he sturdily strides into the room, his build is much slighter than I anticipated. He is a gracious host and devotedly does his PR duties. Something in me told me that to keep a close eye on him as once his part is done, he will leave. It doesn’t matter that the invite says ‘guest of honor’. As soon as he was done, I approached him. I told him how much I loved his show and I was glued to the set at 9pm Pacific each night to watch for over a decade.

I told him I had just gotten my first radio job and it starts in 3 days.
Mr. King: You’re the host?
DT: Yes.
Mr. King: Where does it air?
DT: Inland Empire and Orange County. People who are not near there can listen on the phone or online.
Mr. King: What’s the topic?
DT: Men’s Issues. I am The Men’s Advocate. It’s a place where men can be men. We will talk about dating, relationships, sex, women, fitness, health, business, male hobbies, and the like. I will be talking about excerpts from my men’s book, too.
Mr. King: What’s your book about?
DT: I interviewed over 20,000 men to ask them what their problems are with women. I have a degree in Psychology from UCLA. I coupled the questionnaires with the academic research to write the book. After all this research, I boiled it down to four elements that any guy could do to win over any woman, any time.
Mr. King: What are the four elements?
At this point, Mr. King looks down at the floor, his head is cocked into position with his left ear upward. Then, as it would seem, right before my eyes, that ear grows to the size of a satellite dish. With the slightest body movement, he lets me know, “Shoot. I’m ready” (to listen). It is as if he wants to savor every morsel of what I’m about to say.
DT: First is CONFIDENCE. Despite what women say that it’s abs, tats, size of your member, wallet size, what kind of car you drive. It’s not the money. It’s what the money represents.
Mr. King: Yup.
DT: When I utter the words “money represents”, his body language speaks to me as if I have just found the secret to life.
Mr. King: Next?
DT: CONNECT WITH HER.
To Mr. King, I knew I didn’t have to define this one as I KNOW to be a good interviewer, you have to do the same thing. You have to engage with people. You have to climb into their world. You have to find the commonality.
Mr. King: Yup. Next?
DT: CARING. You have to give a rip.
At this point, he almost broke muster (his ear tilted upward), as if to say “Ain’t that the truth?” He didn’t because he knew he had one more point to listen to.
Mr. King: Yup.
DT: The last point is CHARACTER. You have to mean what you say and say what you mean. Walk the walk.
Mr. King: Yup.
Wait. They all start with C’s.
DT: Yes. I call my formula the 4C’s.
Mr. King: You’re going to go far, kid.
DT: Thank you.
At this point, his body language is disengaging from his ‘locked and loaded’ position.
How do I go about getting sponsors?
Mr. King: I don’t know. I had a guy do that for me.
DT: What would you tell this newbie on starting my own show?
Mr. King: Just be yourself, kid.
—
I am so glad that I didn’t take the moment for granted. He stayed for but a few minutes longer and left without fanfare.

How awesome is that to start my journey with the great LARRY KING??
It’s all gonna be good. Can’t wait for you to tune in and call me to say what you think about the show. 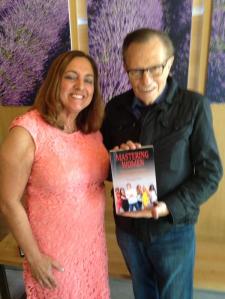